Birds of a Feather

The Iroquoian effigy pipe is a transitory vessel that allows the user to participate in verbal and non-verbal communication with both the physical and metaphysical worlds. Sacred medicines such as Tobacco were smoked during political gatherings, bringing prayers to the Creator, thus facilitating social change. Research suggests that the use of such pipes played a key role in the formation of the Iroquois Confederacy. The essence of the effigy, in our case – the essence of the bird, is manifested through the skill of the sculptor. 200 – 300 – 400 years ago, their hands yielded the split-second nature of the animal – its cheeky little smile and an ever so slight tilt of the head, entering the effigy into a seemingly oppositional dialogue between the ephemeral and eternal. Research suggests that these pipes followed a life cycle that began with their modelling and ended when the pipe was broken intentionally. Today, Twitter serves a similar function. Represented by the bird, our thoughts are manifested in physical and metaphysical spaces (the internet) for the purpose of communicating with others and producing social change.

Social change through social media is the heartbeat of the wider Indigenous community. The use of social media platforms such as Twitter maintain and enliven resistance movements while strengthening communities across Turtle Island. In the rest of the world, heads of state use social media to spew propaganda and threaten nuclear war.

As all of our actions bear consequences, how will today’s choices manifest in the future and what evidence will our descendants find of our decisions? 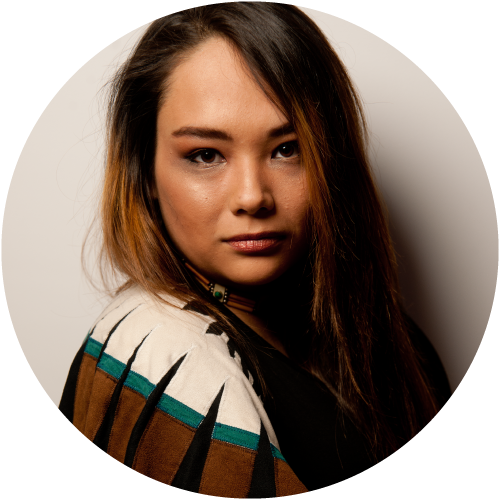 Kaia’tanó:ron Dumoulin Bush is a Kanien’kehá/French-Canadian illustrator and visual artist from Montreal, Quebec.  Currently, she is completing her BFA in Indigenous Visual Culture at OCAD University and has previously obtained DECs in Fine Arts and Illustration & Design at Dawson College. Her personal artwork deals with sexuality, violence, identity, and politics. While professionally, she loves collaborating with clients who seek to enrich Indigenous communities and empower Indigenous youth. Since 2012, Kaia’tanó:ron has worked with the Encore! Sistema after school and summer camp programs based out of Karonhianonhnha School in Kahnawake, Qc. as a music and visual arts educator teaching students from grades two to six.

About the Original Artifact 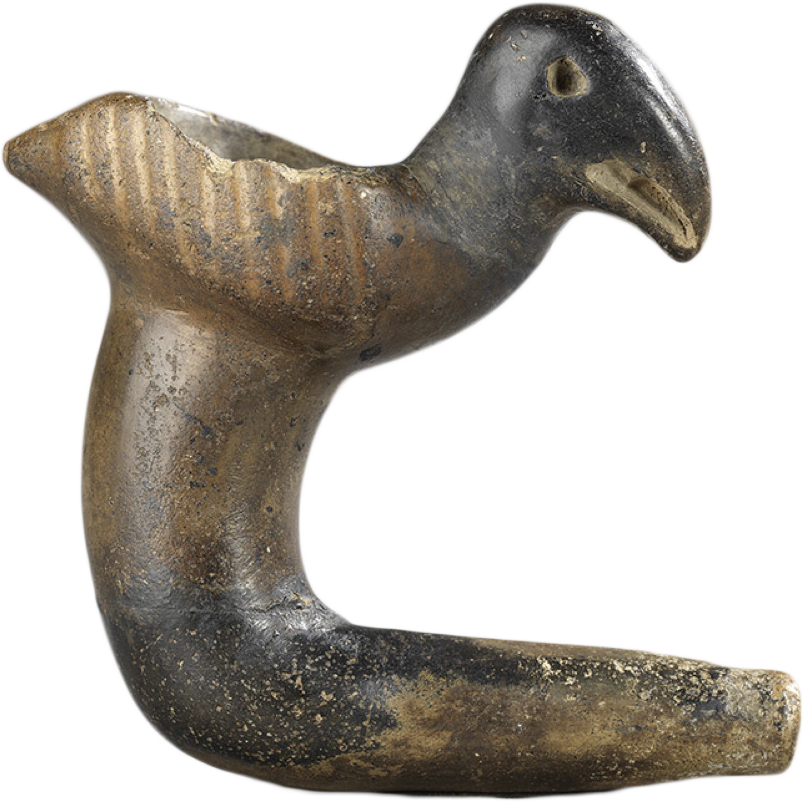 This pipe is part of a rich tradition of Iroquoian smoking. Similar to most Iroquoian animal effigy pipes, the bird on this example looked back at the smoker.

I
knew which being I wanted to work with before I entered the vault. I had visited the First People’s room numerous times and I was frustrated with how the pipes were displayed. Nothing about their political significance or artistry was indicated anywhere, they
were merely ceramic fragments. I wanted to know and share more about the importance of effigy pipes.

Being
a bird lover and owner, I am in awe of the sculptor’s ability to render the essence of the bird.

I
wanted to get to know that surface intimately.