The life cycle of the birch bark scrolls are in perpetual, circular motion. The long bark strips, made possible by the communal nutrients surrounding the birch, are carefully found and harvested with care. Lightweight, compact, and water resistant, the embedded bark will carry it’s story for a very long time. Once it is ready to retire, a new strip of bark will take on it’s story. Through the cycles of change in the bark, the story will also change to better embody the community that carries it. The lifecycle of community is also in perpetual, circular motion; expanding and contracting through kinship, land, and – above all – stories.

A birchbark scroll does not stand on it’s own, it requires the structure of community to be present to vocalize, ingest, and continue it’s story. The language used to inscribe the story cannot be read without the memory, but is broad enough to present itself according to each telling.

It is for this reason that the scroll that Waawiyekidewin is based on is inaccessible to me. In being taken from it’s community, from it’s context and cycle of rebirth, it’s purpose has been irreversibly revoked. Rather than passing on it’s story to the next generation – nourishing and fostering community – it lays dormant, gathering dust. And for what purpose?

From the research I have gathered over the course of Uncover/Recover, it is likely that the scroll held a recipe for a tea. It is for this reason that Waawiyekidewin explores healing through the eyes of the birchbark scroll. Beyond the rift caused by separation from it’s community, Waawiyekidewin endeavours to realize the resiliency and power of the stories and language of the birchbark scrolls. 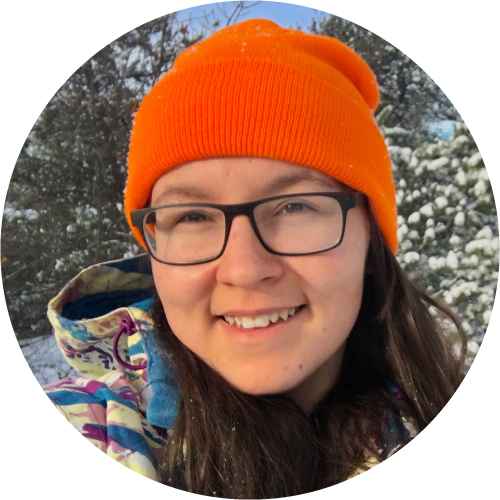 Mariah is an Anishinaabe-kwe and creative specializing in graphic design. She utilizes her platform as a communicator to explore temporalities and map memories, with the intention of building relationships along the way. Her work is consistently fuelled by ancestry, storytelling, and circularity. Mariah’s current portfolio examines healing through the distinct language and character of mediums new to her practice.

About the Original Artifact

Birch bark was the Anishinaabeg’s equivalent to paper. Using pointed tools, they incised inscriptions that conveyed information on a variety of topics, from verses of a song to arrangements for people to meet up. The plants depicted on this inscription suggest that it records a herbal remedy. Such medicinal formulas were transferred from owner to owner through purchase.

In the beginning, a lot of time was invested in approaching this project through academic research methodologies; libraries, peer reviewed papers, historical records. This process allowed me to establish the exterior layer of the scroll and my own work, but it also provided valuable insight in terms of how it has been previously assessed by individuals and institutions outside of the indigenous community.

It was key to my work that I not legitimize the scroll through western structures of assigning value, but honour it as a crucial member of the Anishinaabe nation. Beyond all barriers, this small piece of bark, battered through the hands of strangers, has not only fulfilled it’s original intent but it continues to teach.

The bulk of my research took place in exploring the scroll not simply as a physical object,

but as a tool, a knowledge keeper, and the physical fragment of one being and dimensionless summary of many more.

My most valuable research involved conversations and exchanging stories, exploring the process of creating a scroll, and spending time with the land and communities from which this technology emerged. As a communicator, the scroll serves as a vessel that absorbs and outputs information. As a communicator myself, I was drawn to the vessel space; the space of conversion between input and output. It was in the exploration of this space and conversations with my nieces and nephews that I learned the most.

With this, my intentions throughout the project has been to build a relationship with the scroll and, in doing so, allow it to guide my understanding of the world around me. It is through this lens that Waawiyekidewin emerged.